The steel of my Japanese knife, why is it so awesome?

A significant change happened previous century when after WW2, Japan was banned from making weapons, this includes Katana’s.

So sword makers where out of a job, but soon many reverted to making Kitchen knives.

They then made them the same way as the been making Katana from generation upon generation, labor intensive production, striving for perfection, high cutting performance…

Where does the carbon steel come from nowadays ?

Most commonly used Japanese steel comes from Hitachi and their Yasuki steel plant.

They have analyzed the steel from samurai swords that where known to be of exceptional quality.

Then they formulated a steel that is as close as possible to the steel from the swords they have analyzed.

From that base steel they then branched out other formulations with adding or removing components in order to have different properties that suits different needs.

The different needs are more or less a knife that can hold an edge for a long time such as Aogami super steel or also called blue super steel.
This means the steel is harder then most others in the Hitachi family but also more brittle. Below I explain more about hardness or HRC.

If brittle is undesired for the use of the knife then a softer steel like Yellow paper 3 is on the other side of the spectrum. This steel is softer and tougher but won’t hold and edge as long as blue super steel or others in between.

Knowing this makes you better understand what you want in a knife.

Most knife makers try to forge blades with a fine and uniform grain size in the steel in order to be able to take a very sharp edge.

This happens because of the type of steel the use and the their knife making skills that improve grain size and heat treatment process applied.

Knives from different makers made from the same steel can behave differently in the way the cut, hold edge, excetra

This comes down to the skill of the knife maker.

A fine and uniform grain structure in a pure carbon steel like white steel or Shirogami makes it easy to sharpen and be able to take a very sharp edge.

White steel is pure carbon and iron in its composition.

Stainless steel is made up by having at least 11% of chromium in the formulation.

This makes the steel rust resistant to a good level but not absolutely stain resistant.

Stainless steels are made up with other alloying components than chromium that add to toughness and wear resistance.

Stainless steel has more carbide forming alloys which means the grain structure is not as fine as carbon steels.

This means that is a bit more difficult to sharpen than carbon steel and it won’t be able to take as much as a sharp edge than a carbon steel knife.

Powder metallurgy steels are an exception to this as they have high carbon content = fine grain structure and be stainless as well.

Powder metallurgy is a different and complex process of manufacturing steel. But ideal for kitchen applications and also well used in the making of dentistry en surgical tools.

Examples of this Japanese steel are R2 or SG2 and SRS15.

Japanese knives stand out because the are harder, sharper and thinner. The fact that the are harder and sharper is because of the fine grain sturcture in steel used for the production and the skills applied by the knife maker.

As I spoke before about harder and softer steel and why that might be useful. There is a scale to determine how hard steel are.

It is called Rockwell hardness C scale or HRC.

The Rockwell C Scale is a hardness scale based on indention of a material.

The Rockwell test determines the hardness by measuring the penetration of an indenter under a large load compared to a penetration under a preload. The result is a dimensionless number noted as HRC. Where c is the scale.

Hardness Rockwell scale C is a guide that tells us whether the steel is soft or hard.

This is an important quality in a knife, the harder or higher HRC means a longer lasting edge and sharper edge angles. This will contribute to cutting performance.

The downside of a harder blade is that is more brittle

Any Japanese steel over 65 HRC gets hard to sharpen. In my opinion the best balance in hardness and ease of sharpening lies around the 62-63 HRC mark.

Western knives are softer and lower on the HRC scale.

They won’t hold their edge for that long compared to the Japanese steels.

Thats is why nowdays Japanese steel is prefered by top chefs all over the world helpenig to achieve a better standard of cooking. 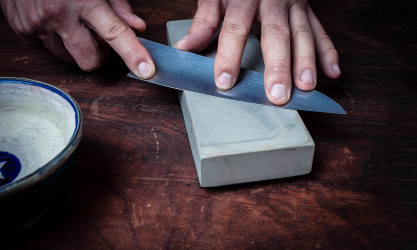 Orakei Bay Village sharpening pop up store Mar 7th, 2017
The steel of my Japanese knife, why is it so awesome? Feb 5th, 2017